Counting Down the 25 Highest-Paid Players in the NFL 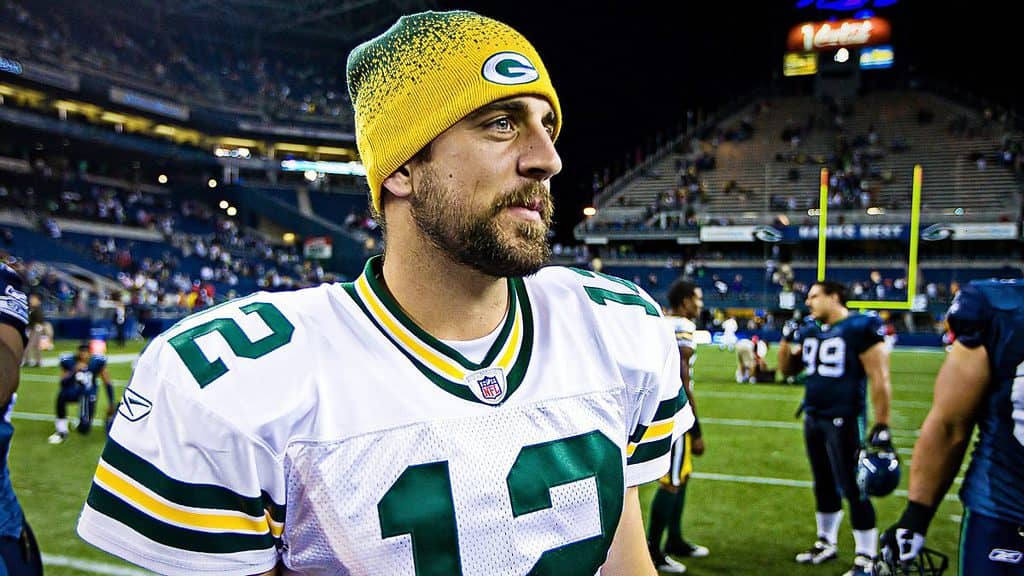 If there’s one thing every true NFL fan loves, it’s stats — comparing our favorite players and franchises, ranking and stacking them up against their peers and the all-time greats. However, not every stat is earned solely on the field. One, in particular, comes from a cosmic mix of the individual’s in-game performance, business acumen, celebrity pull, and veteran presence: their salary.

For a comprehensive ranking of this crucial stat’s highest performers, here’s our countdown of the highest-paid players in the NFL.

The number 25 spot on the list of highest-paid NFL players is a three-way tie between DeForest Bucker, Leonard Williams, and Jaire Alexander.

Bucker joined the Colts in 2020 after four years with the 49ers and has proven himself a worthy investment. He went All-Pro in his first year with the team and then went to the Pro Bowl in his second year.

A 27-year-old California native and former USC attendee, Leonard Williams has played his whole pro career in New York. He originally joined the Jets in 2015 before moving to the Giants four years ago.

Jaire Alexander has secured the salary that earned him his place on this list after recently signing a four-year contract extension with the Packers. He was a first-round draft pick four years ago and has racked up a respectable 188 tackles and five interceptions in that time.

Laremy Tunsil has led an impressive early career in the NFL. Despite social media controversy hindering his early draft prospects, he became the 13th overall draft pick in 2016, going to the Miami Dolphins. Since 2019, he has been with the Texans, with whom he signed a new contract in 2020 that made him the highest-paid offensive lineman in the league. He has played in two Pro Bowls and was also ranked one of the NFL Top 100 Players of 2021.

Sporting his first-ever Super Bowl ring from last year is Rams DT Aaron Donald. Donald’s seven-year retention on the All-Pro roster should tell you all you need to know about how he earns his $22.5 million price tag. He was also the AP’s Defensive Player of the Year in three of the last five years.

Serving with the Packers since they drafted him in 2013, David Bakhtiari is nearly a decade-long veteran of the franchise. After suffering an ACL tear late in the 2020 season, Bakhtiari could not return to the field until late in the 2021 season. Despite the injury, he has made All-Pro in two of the last four years.

Trent Williams, the former All-American from his time playing college football at Oklahoma, narrowly avoids being the next tie on our list. With a relatively thin $10,000 edge over David Bakhtiari, Williams manages to snag the #21 spot free and clear. Williams, who joined the (then) Redskins in 2010, moved to the 49ers in 2020 following a dispute with the former’s administration in 2019.

It should be no surprise to see multiple-record holder Khalil Mack on the list of highest-paid athletes in the NFL. He was the first player in the league to be selected first-team All-Pro for two positions simultaneously: defensive end and outside linebacker. He also holds the NCAA record for forced fumbles.

Although the Bears made Mack the then-highest-paid defensive player in NFL history back in 2018, they have since traded him to the Chargers for the 2022 season.

Carr is an eight-year veteran of the Raiders. In that time, he has participated in three Pro Bowls. Though he has yet to win a playoff game, he did help the Raiders reach the playoffs in the 2016 season, their first time to do so since 2002.

Garrett was the #1 pick overall in the 2017 draft. He came to the NFL from Texas A&M, where he earned unanimous All-American honors in 2016. Since going pro, he has been All-Pro twice and played in three Pro Bowls.

The sixteenth-highest salary in the NFL is a two-way tie in the city of angels.

After 12 years playing for the Lions, Matthew Stafford came to LA last season to play for the Rams. Stafford turned out stellar results in that first year with the new squad. He threw a career-high 41 touchdowns and helped the team reach a Super Bowl win.

In 2016, Joey Bosa went into the family business as an NFL defensive end. His father, John Bosa, formerly played the position for the Miami Dolphins, and his brother, Nick, currently does the same for the 49ers. Bosa, one of the best pass rushers in the NFL, earned the 2016 title of AP Defensive Rookie of the Year.

Joey Bosa isn’t the only family legacy to make the list. Just above him at #15 is T.J. Watt, younger brother of teammate Derek Watt and the Arizona Cardinals’ J.J. Watt. Watt is the current claimant to the accolade of highest-paid NFL defensive player in history, and he earns his paycheck. He has led the NFL in sacks for the past two seasons. Also, in 2021 he tied the single-season NFL record for most quarterback sacks in a season, despite missing two games that season.

At a cool $27.3 million salary, DeAndre Hopkins is the second-highest-paid non-QB on this list. This Cardinals wide receiver has always been a force to be reckoned with. He is also the only member of the Cardinals to break the top 25 salaries. He has found himself in the Pro Bowl and on the All-Pro roster five times each.

Garoppolo started his career on the Patriots as a backup for Tom Brady before moving to the 49ers. Despite injuries in recent years, he has led the Niners to multiple playoff runs, including last season’s NFC Championship.

With a $1 million lead, Davante Adams comes out ahead of DeAndre Hopkins as the highest-paid player in the NFL who is not a quarterback. Adams, who will turn 30 on Christmas Eve of this year, is a two-time winner of AP All-Pro honors. He has also gone to the Pro Bowl for the last five consecutive seasons.

Earlier this year, the Packers traded Adams to the Raiders, where he reunited with his college quarterback, Derek Carr (#18 on this list). The two played together at Fresno State.

Ryan Tannehill spent seven seasons with the Dolphins before moving to Tennessee in 2019. He took over as starting quarterback midway through the season, leading the team to the AFC championship. He was named NFL Comeback Player of the Year for that season and made it to the Pro Bowl. He hasn’t disappointed fans since, leading the Titans to what is now three consecutive playoff appearances.

Longstanding Falcons veteran Matt Ryan will be trying something new this upcoming season after moving to the Colts earlier this year.

Ryan has played in all but three games in his 14-year tenure in Atlanta since they drafted him in 2008. If ever the NFL was to offer a participation trophy, he’d deserve it as much as anyone, alongside his numerous other accolades and records. In 2018, he became the first quarterback ever to earn $30 million per year.

Carson Wentz started his NFL career with the Eagles, with whom he spent five seasons. In 2017 he led the team to the 11-2 record that culminated in their first Super Bowl win, despite Wentz himself succumbing to an injury that took him out of the postseason. After the Eagles, he spent one season with the Colts before joining the Washington Commanders for the 2022 season.

Kirk Cousins joined the Redskins in 2012 as a backup to (then) Redskins quarterback Robert Griffin III. He replaced Griffin as the starting QB in 2015, a position in which he set numerous franchise records and got himself a place in the 2017 Pro Bowl.

In 2018, Cousins signed a new deal with the Vikings as a free agent. Cousins ranks in the NFL’s top tier for all-time completion percentage and his career passer rating.

The Rams picked up Jared Goff as their first draft pick overall in 2016 and had mixed results on their investment. After a spotty first season, he brought two great years to the Rams, including their first playoff appearance in 13 years in 2017.

The following year saw the Rams’ first Super Bowl appearance since 2001. Goff went to the Pro Bowl both years. After another two inconsistent years, the Rams traded him to the Lions for Matthew Stafford in 2021.

Formerly the highest-paid NFL player of all time, Russell Wilson’s place in the upper tier of this list remains secure. Many regard him as one of the best running quarterbacks in NFL history.

Wilson played both baseball and football at NC State and played a short rotation in minor league baseball before joining the NFL with the Seahawks in 2012. He had a successful debut season, earning him Pepsi NFL Rookie of the Year. During his tenure with the Seahawks, he participated in nine Pro Bowls and brought the team to two consecutive Super Bowls. We will see if his performance in his new home with the Broncos proves as illustrious.

Deshaun Watson opened his career with four successful seasons with the Houston Texans. In those four years, he was selected for three Pro Bowls. Watson sat out the entire 2021 season due to disputes with team management and multiple lawsuits over sexual misconduct, ultimately leading to the team trading him to the Browns for the upcoming season.

Dak Prescott joined the Cowboys in 2016 as an alternate for starting quarterback Tony Romo. He took over the position after Romo sustained a preseason injury. That year, he was named NFL Offensive Rookie of the Year and also attended the Pro Bowl. In addition, he has brought his team on three postseason runs.

Josh Allen has made some significant waves in a relatively short career. His performance had its ups and downs in his first two seasons with the Bills. In 2020, though, he came out roaring, bringing the team to their first playoff victory since 1995, the year before Allen was born. He won both All-Pro and Pro Bowl honors that same year.

He built on that success in 2021 by leading the NFL’s first-ever “perfect offensive game” — in which his team had a touchdown-scoring drive on every offensive possession. Allen signed a contract in that year granting him $150 million in guarantees, briefly giving him the record for the largest deal in NFL history.

The second-highest-paid player in the NFL is Patrick Mahomes, son of former MLB pitcher Pat Mahomes. In 2018, his first year as a starter, he became the first quarterback in history to throw for over 5,000 yards in a single season in both college football and the NFL. He won numerous accolades that season, including NFL Offensive Player of the Year and NFL MVP. The following season, he brought the Chiefs to their first Super Bowl appearance in 50 years, which they won, earning Mahomes the title of Super Bowl MVP.

The highest-paid player in the NFL and the first player in the league ever to earn more than $50 million in a single season is Packers QB Aaron Rodgers. The Green Bay icon has been with the franchise for 17 years, 14 as the starting quarterback. In that time, he has brought home one Super Bowl ring and countless other awards, accolades, and records. Many believe him to be one of the best NFL quarterbacks of all-time.

The NFL is as diverse in its play styles, backgrounds, and personalities as its roads to the top of the salary pool. The highest-paid players in the league come from different teams and different parts of the field. They’ve had vastly ranging careers; some are veterans of over 15 years, while others are relatively new to the pro field.

What they all have in common, though, is that they’ve made their way to the highest echelons of the pay scale through on-field performance and the love of their fans. As a result, these are the people whose teams can least afford to lose them.